Washington is a city known for being muggy and rushed: Everyone is late for something, and today’s top news is tomorrow’s forgotten history. However, the topic of Ukraine, now nearly seven months afte

by Jason Jay Smart | 25 Sep, 10:44 AM
Signs and flowers of support adorn the gates of the Ukrainian Mission to the United Nations in New York, Tuesday, March 1, 2022. (AP Photo/Seth Wenig)
Content

Washington is a city known for being muggy and rushed: Everyone is late for something, and today’s top news is tomorrow’s forgotten history. However, the topic of Ukraine, now nearly seven months after Russia’s invasion began, remains important to Americans from all walks of life.

Reuters reported on a poll of Americans, conducted in mid-August, that found that more than half of both Democrats and Republicans support continued assistance for Ukraine “until all Russian forces withdraw.” Only 18% opposed such a policy.

Policymakers and government officials have been unusually united in their pro-Ukraine sentiments and were open to finding new ways that the US could support the host of problems that Ukraine will face in the coming months.

Stephen Nix, a lawyer in DC who heads the International Republican Institute (IRI), a US Government financed organization that has worked in Ukraine for nearly three decades, says that he is dealing with Ukraine-related issues, daily, on the Hill, saying that he has “a Ukrainian delegation in Washington this week and in the course of numerous meetings in Congress, we continue to see broad, bipartisan support for Ukraine. Given the Ukrainian military’s recent success in its counteroffensive, I see a sense of optimism and even stronger signs of the US commitment to Ukraine’s security and sovereignty.”

Supportive sentiments of Pres. Joe Biden’s handling of the war were expressed by James Walsh, who has lived and worked in the DC area for decades, relaying his view that the “Biden administration did an historic job at quickly rallying and utilizing western support after the escalation of the invasion in February this year. It reminded me of the level of unity in the US and the world after 9/11.”

Walsh acknowledges that some of the media coverage of Ukraine has declined, however, “events on the ground, in Ukraine, continue to bring it to the public eye. Atrocities uncovered and Ukrainian victories keep support strong.” Ultimately, “Ukraine’s success and Moscow blunders and barbarity have kept Americans ‘in the fight,'” continued Walsh, adding, “the reduction of initial inflation of gas prices has helped reduce apathy as well.”

Walking around the Washington, DC area, the number of Ukrainian banners hanging from roofs or tacked onto doors, and Ukrainian flags blowing alongside the Stars and Stripes, is awe-striking says Ben Weaver, a native of the Deep South, continuing that “I’ve never seen anything like it – such strong support for another country.” 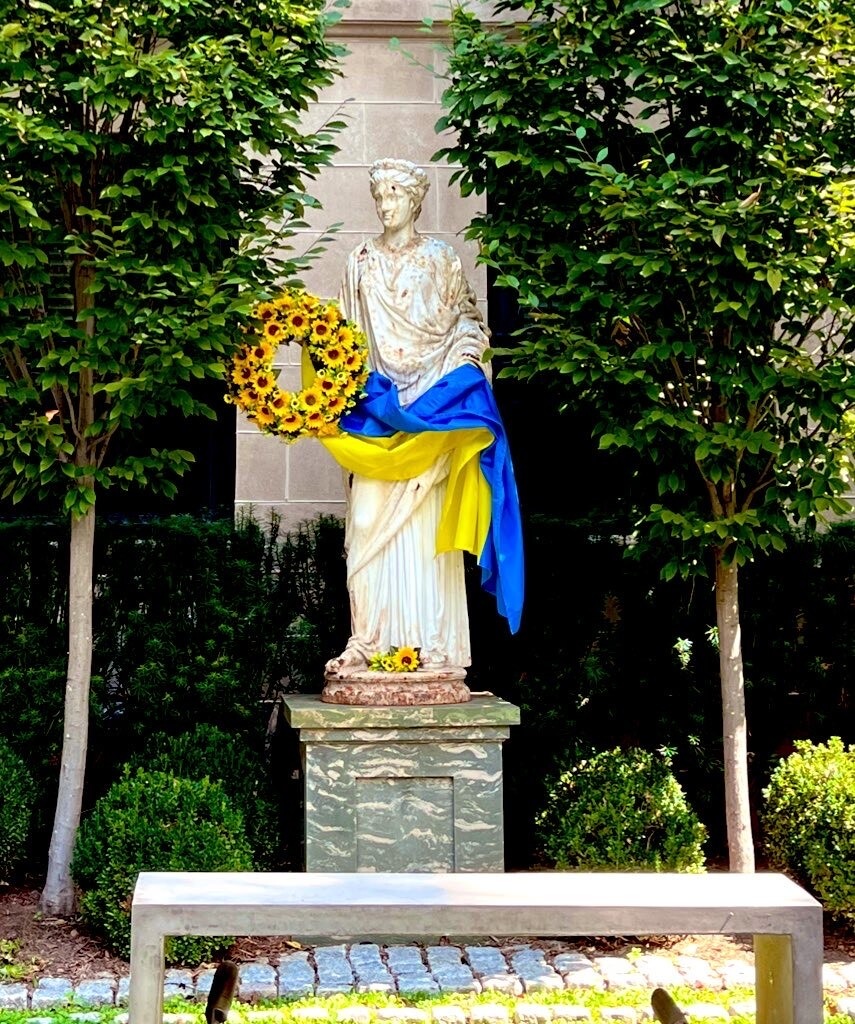 Weaver believes that Americans such as himself support Ukraine because they “sympathize with their fight for freedom.” He continues that Ukraine is “a democracy now and is no longer under the hold or sway of the criminal Kremlin. Make no mistake, no amount of evil from Putin’s army can defeat Ukraine. They are a free people and will continue to defend their homeland until they have complete victory over the Russian invaders. And I proudly help Ukraine with this. They have my heart. They have my full support. I stand with Ukraine and Ukraine will prevail. God is with Ukraine and her beautiful people.”

This strong support for Ukraine is tangible, according to a Ukrainian-American man who spoke to the Kyiv Post, saying that it is felt and that the “support comes from media reporting on this and the Ukrainian community is very strong and talking about it. Plus, we Americans are supporting freedom and liberty and Ukrainians are fighting for it.”

The continued popular and political support for the war in Ukraine seems likely to survive November’s elections, in which all members of the US Congress will be up for re-election, according to sources with whom the Kyiv Post spoke. Though a rarity in polarized, divided, and fast-paced Washington, support for Ukraine seems to be the rule, rather than exception – a constant that is unlikely to change.

War in Ukraine
2 Dec, 09:51
Biden Says He’s Ready to Talk to Putin but With One Major Caveat
By AFP
« Previous Tens Of Thousands Of Jewish Pilgrims In Ukraine Despite War
Next » Olena Zelenska Presents Her Charitable Foundation in USA
POPULAR

1
Kremlin Rejects Biden Terms for Ukraine Talks
The Kremlin on Friday, Dec. 2, rejected US President Joe Biden’s terms for Ukraine talks with Russian leader Vladimir Putin, saying Moscow’s offensive will continue. “What did President Biden say in f
By AFP
2
Weaponizing Winter and Ukraine’s Victory: NATO Foreign Ministers’ Meeting in Bucharest
By Lesia Dubenko
3
Biden Says He’s Ready to Talk to Putin but With One Major Caveat
By AFP
4
EXPLAINED: How Many Troops has Ukraine Lost in Russia’s Invasion?
By Kyiv Post