It turns out that the sinking of Russia’s flagship Moskva missile cruiser on Thursday, April 14 was not only great for Ukraine but a welcome boon for Ukrposhta, the national postal operator. Its origi

It turns out that the sinking of Russia’s flagship Moskva missile cruiser on Thursday, April 14 was not only great for Ukraine but a welcome boon for Ukrposhta, the national postal operator.

Its original stamp depicting a Ukrainian soldier making an obscene finger gesture at the Moskva became an instant hit for collectors, who saw it as a sign of victory.

The missile cruiser gained notoriety in the early stages of Russia’s invasion of Ukraine when its crew called on a unit of Ukrainian border guards on the strategically important Snake Island in the Black Sea to surrender, only for them to refuse defiantly.

Well, there’s a new issue, two sheets, one in English and one in Ukrainian, marking the Moskva’s demise.

The initial issue in April had a print run of one million stamps, according to Ukrposhta, and lines snaked back up to 500 metres at the Central Post Office on Khreshchatyk 22 in the capital, as ordinary collectors and speculative buyers queued for hours. 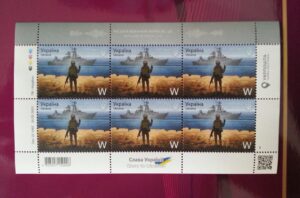 One of the original sheets issued in April. (Photo Credit: Peter Dutczyn)

This time round, with the issue coming in the form of two sheets of six stamps with the letters W and F, the number of stamps being printed is five million.

Despite the huge size of this issue, the biggest in the history of Ukrposhta (not including ordinary definitive stamps), which celebrated its 30th anniversary in March 2022, interest is still very high.

Prices on popular platforms, both local and international ones, have not reached the dizzy over-inflated highs of the first issue, but some online resellers are already asking around $50 for both sheets, W and F. 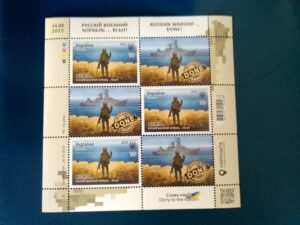 Prices for the first issue on resale sites have fallen, but still remain high.

The first batch of the new issue was put up for sale in the second half of May and quickly sold out.

Another batch was scheduled to go on sale on June 10, though it was not available for over-the-counter sales at the Central Post Office on Khreshchatyk 22 in downtown Kyiv.

It is, however, available via a few local sites, including via the Ukrposhta site here (including for overseas customers).

Ukrposhta says it also has ambitious plans to issue a stamp to celebrate The Kalush Orchestra’s victory at the Eurovision Song Contest last month, and at least one more patriotic stamp issue is just around the corner.

You can read more about the original stamp issued in April here. Best Oldest Newest
Write the first comment for this!
« Previous Trial of Russian Soldier Charged with Murder, Rape Begins
Next » After all the foreign artillery deliveries, why is Ukraine demanding more and better guns?
POPULAR