11 people control much of Ukraine’s oil and gas sector

A new report by Ukraine’s Anti-Corruption Action Center has revealed that 11 powerful individuals own a quarter of all permits in Ukraine to extract oil and gas. Initially published in Ukrainian on Ma

A new report by Ukraine’s Anti-Corruption Action Center has revealed that 11 powerful individuals own a quarter of all permits in Ukraine to extract oil and gas.

Initially published in Ukrainian on March 28, the open-source investigation digs into company registries and investigates suspicious firms in order to establish the identity of the companies’ true beneficial owners. The results read like a who’s who of the rich, powerful and politically connected in Ukraine.

The report paints a dim picture of efforts to introduce transparency into the Ukrainian energy market and open it to foreign investment, a priority for a country attempting to break free of dependence on Russian natural gas.

“We would like to attract true foreign investors to extract oil and gas in Ukraine,” says Daria Kaleniuk, the Anti-Corruption Action Center’s executive director. “But we didn’t manage to find a single known international investor who could get a license.”

As of February, Ukraine has issued 474 special subsoils permits allowing the owner to extract oil and natural gas. However, the procedures for receiving such a permit are seldom transparent. Over half of the permits — 270 — are held by state entities. The remaining 204 belong to private companies.

By law, legal entities in Ukraine must indicate their beneficial owners in the State Registry. But a company can also state that it has no beneficial owner. Furthermore, there are no clear measures to verify the information, meaning companies can easily get away with hiding the beneficiary or listing a false one.

As a result, the Anti-Corruption Action Center (AntaC), set about examining the beneficiary information provided by the permit-holding companies and investigating the ways that these companies conceal their ultimate owners.

Their investigations revealed that the true beneficiaries of companies with subsoils permits were often so-called “politically exposed persons” (PEPs). That term is an important one in Ukraine, describing individuals who straddle the border between business and political power. According to AntaC, PEPs are people who perform or previously performed political and state functions or have close ties to such people.

The most glaring PEP that AntaC found was former ecology minister Zlochevsky, whose extensive oil and gas holdings can be traced back to his Burisma Group holding company and the Tekhnoresurs PJSC firm. After the EuroMaidan Revolution, the new Ukrainian authorities investigated his companies’ possession of permits, many of which he appeared to have received during his time as minister.

The British authorities even froze $23 million on the accounts of Zlochevsky’s companies and began a money laundering investigation. However, in January 2015, Britain unfroze the funds after receiving a letter from a senior Ukrainian prosecutor that said Zlochevsky was not suspected of a crime — despite the ongoing investigation against him.

The next year, a Kyiv court cancelled the warrant against Zlochevsky and effectively closed the case against him. The AntaC report demonstrates that, to this day, he maintains a significant presence in Ukraine’s oil and gas sector.

Finally, Oleksandr Onyshchenko, an oligarch and lawmaker, owns seven permits with three companies. Ukraine’s Anti-Corruption Bureau suspects Onyshchenko of embezzling funds during his work in the natural gas industry. In 2016, he fled the country. Soon after, he was charged with treason by the Security Service of Ukraine.

AntaC found that, with 16 of the 86 companies it investigated, it could identify a probable beneficiary who differed from the official one listed in the registry. Meanwhile, 33 companies listed a Ukrainian or foreign national as the beneficiary, but that person had no publicly available record of involvement in oil and gas. This raises suspicions that these people are not the true beneficiaries.

Another 28 companies listed no beneficial owner. However, AntaC was able to connect 19 of these companies to a true beneficiary. Kaleniuk doubts the problem of corrupt practices surrounding subsoils permits is confined to private companies. She believes that stateowned, permit-holding companies have many agreements with private firms “and the state is not winning from these joint agreements.”

Her organization plans to dedicate its next report to state companies. 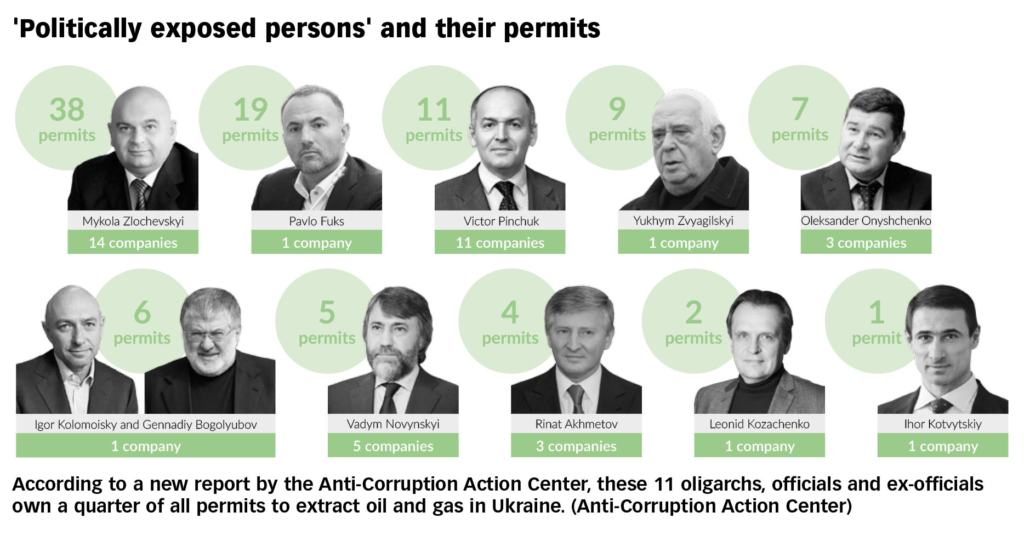 Kaleniuk also recommends simplifying the mechanism for obtaining a subsoils permit and ensuring that the procedure is competitive, allowing international investors to freely participate and win.

“If I were a foreign investor… I wouldn’t believe that it is possible to enter the market without paying a bribe,” Kaleniuk says.

She and AntaC stress that, without transparency, Ukraine will not be able to achieve greater energy independence.

For his part, the current ecology minister, Ostap Semerak, says he is unsatisfied with the status quo and has worked to increase transparency — including ensuring that the registry information that AntaC investigated was available to the public online. A working group at the Ecology Ministry is also developing a packet of legal acts to liberalize the oil and gas extraction sector, he says.

“Unfortunately, Ukrainian legislation has limited my ability to influence the situation as Minister of Ecology,” Semerak said in a written statement to the Kyiv Post.

However, the sector’s problems are larger than permits. According to Dmitry Churin, the head of research at Eavex Capital, Ukrainian oil and gas companies are profitable. But extraction is growing slowly and foreign companies have struggled for reasons that have nothing to do with regulatory barriers to entry.

For technical and climatic reasons, drilling is difficult in Ukraine. The country needs new technology, which so far has not reached Ukraine.

Before the EuroMaidan Revolution that drove President Viktor Yanukovych from power on Feb. 22, 2014, some of the world’s largest oil and gas companies, Shell, Chevron, Eni and ExxonMobil, entered the market, committing to invest millions of dollars into the industry. But “they could not realize the potential they saw in Ukraine,” Churin says.

Back in 2015 there were only five to six purely Western gas businesses in Ukraine, including: Cub Energy, Kub Gas, Arawak, Eni and Cadogan. Overall, private companies produced nearly 3 billion cubic meters of gas last in 2014, accounting for about 15 percent of total domestic production.

Since then their presence has completely disappeared. Cases like these have deterred foreign investment in Ukraine.

“That’s why, as participants in the investment market, we would like to see more public oil and gas companies that bring foreign investors and expertise,” Churin says. 1
Biden’s Shadow War in Ukraine
Strategic ambiguity with regard to Kyiv is tantamount to strategic certainty for Moscow. The West needs to be bolder and more decisive about winning.
By Jon Sweet
2
'We Need to Decide That We Want Ukraine to Win'
By Jason Jay Smart
3
Top Israeli National Security Expert on How Ukraine Can Win
By Jason Jay Smart
4
Mass Resignations Rock Ukrainian Government Amid Corruption Scandals
By Alisa Orlova
back to top