Inside Kherson: Where Tourism Battles on Against Russia

This is not how this article should have originally started. When it was first written in January 2022, Ukrainians were still living an ordinary life, traveling to the breathtaking sites of Bukovel in

This is not how this article should have originally started. When it was first written in January 2022, Ukrainians were still living an ordinary life, traveling to the breathtaking sites of Bukovel in the western part of the country tourito ski and enjoy the cold winter weather.

Despite growing tension in the country, and Russia’s military build-up at its borders, many Ukrainians were staying optimistic and preparing for the upcoming tourist season: It had just started gathering pace after the government lifted most of the pandemic-induced restrictions.

With governmental initiatives like Ukraine.ua attracting hundreds of thousands of people from over 200 countries, and private individuals creating their own businesses, the future of Ukraine’s tourist scene looked bright.

Khersonska Oblast, located in the southern part of Ukraine, was no exception.

Khersonska is home to multiple attractions, such as the Askaniya Nova wildlife park, which is an active member of the UNESCO Man and the Biosphere Programme, the Maldives-like beaches, wine chateaus, and the Pink Lake. It also served as a vibrant techno scene hosting major festivals like the Wave spot which combined kitesurfing with world-class DJ performances. 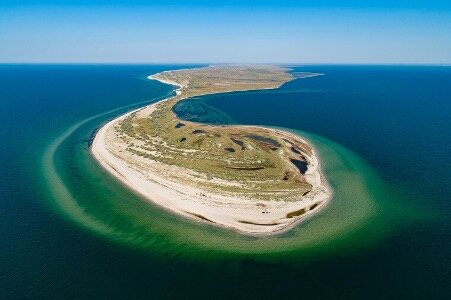 The Ukrainian Maldives, Photo by Trip Must Go On.

“I just want those Russian bastards to leave my land as fast as possible,” replies Pavlo Biletsky to my question about how he feels seeing the Antonivskyi bridge, next to his home city, Kherson, being struck by the Ukrainian army to cut off supply links for the Russian occupiers.

In January, Biletsky, who is the co-founder of the Kherson-based tourist agency Khers-on that organizes yacht sailing tours, wine tasting, and costume tours amplifying Kherson’s diverse ethnical and historical scene, sounded nothing like he does now.

Excited about the pandemic’s gradual reduction, Biletsky had been talking juicy content back then, which, according to him, is a must for attracting tourists. He was thanking USAID for helping him launch the Trip Must Go On project that significantly boosted regional tourism. He was looking forward to resuming the fun trips with tourists from Lithuania, Czechia and bringing wildlife lovers from countries like Italy.

Biletsky had said, “Compared to 2020, the number of tourists in 2021 increased by 15 percent. The road to Askaniya is close to perfect now. We also have returning tourists. Some have come back as many as seven times,” adding that he hoped that with time, big hotel chains would recognize the value of the region and make a foray into it.

However, the war launched by Russia on Feb. 24 completely shattered Biletsky’s hopes, rendering the dreams of turning Ukraine into a major touristic hub –  beyond the traditional western attractions like the ghost town of Prypyat and soviet mosaics shown on popular YouTube channels like Bald and Bankrupt –  unrealistic. 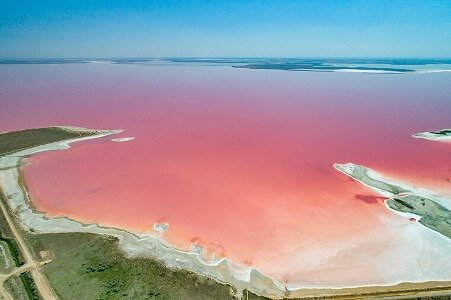 The Pink Lake. Photo by Trip Must Go On.

“Our business is dead at the moment. We decided to turn it into a charity project for helping the Ukrainian army and the locals in Khersonska Oblast who did not have the chance to leave,” said Biletsky, who found out about the war while on vacation abroad.

Over the months, he has collected thousands in donations to purchase and deliver food and other basics to those in need.

Asked whether the Russian army obstructs their attempts to help the locals, including those working at the Askaniya Nova wildlife park, he abruptly answered, “forgot to ask them for permission.” He later added that, overall, the occupiers are indeed obstructing their work. The local resistance, however, is too strong.

Biletsky’s latest maneuver, which he describes as a quest, shows the scale of defiance in Kherson.  The locals “greeted” the Russian tanks with Ukrainian flags and mass protests and are carrying out systematic disruptive act: obstructing the collaborators’ attempts to organize a Crimean-like annexation referendum or to force Ukrainians to take Russian passports and use the ruble.

“An acquaintance called me the other day saying that he wants to donate his off-road vehicle to help Ukraine win faster. ‘Great news,’ I said, ‘but how will we transport that one?’ It’s in the occupied Kherson,” he recounted.

Biletsky said that it took him three weeks to execute this mission, which involved a great deal of luck and insolence, and many friends and relatives. “The car is now in the safe hands of the Ukrainian army,” he revealed, referring to the troops in northern Khersonska Oblast, where Ukraine is preparing to launch its counteroffensive on the ground.

“I enjoyed the Crimean view,” admitted Biletsky in an allusion to Ukraine’s strike on the Saky airbase in the temporarily occupied Crimea, which immediately resulted in an exodus of Russian tourists via the Kerch bridge, despite Moscow’s faulty attempts to portray the explosion as an accident caused by self-detonation.

“I will continue to help the Ukrainian Armed forces for as long as necessary,” he pledged.

1
Kremlin Rejects Biden Terms for Ukraine Talks
The Kremlin on Friday, Dec. 2, rejected US President Joe Biden’s terms for Ukraine talks with Russian leader Vladimir Putin, saying Moscow’s offensive will continue. “What did President Biden say in f
By AFP
2
Weaponizing Winter and Ukraine’s Victory: NATO Foreign Ministers’ Meeting in Bucharest
By Lesia Dubenko
3
EXPLAINED: How Many Troops has Ukraine Lost in Russia’s Invasion?
By Kyiv Post
4
Biden Says He’s Ready to Talk to Putin but With One Major Caveat
By AFP

Russia upset about Zelensky’s ‘Person of the Year’ Award

Bout was sentenced in 2012 to 25 years in a US jail after he was accused of arming rebels in some of the world’s bloodiest conflicts.